Atlas is an insecticide of the synthetic pyrethroid group used to control a variety of ‎pest of various crops. The product acts as a stomach and contact toxicity with a ‎damaging effect on the insect's nervous system. Atlas doesn't have systemic ‎action.‎

For the control of insects and mites


Biomectin is used to control a variety of insects:‎‏ ‏Leaf mining flies (Liriomyza), ‎Thysanoptera, Psylla pyricola,‎‏ ‏and mites. The active ingredient, Abamectin, which is ‎a natural product of soil microorganisms, is uptaken by the plant tissues and moves ‎within them via translaminar motion. The product acts mainly through contact and the ‎digestive tract although its toxicity is relatively low. Abamectin affects the insect's ‎nervous system. Shortly after exposure, the insects become immob 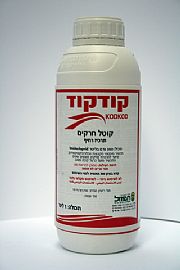 Kodkod is a systemic product from the chloronicotinoid family and is used to control ‎various insects. The product has contact activity but is also efficacious when ‎ingested.‎

Thiodol is an organo-chlorine insecticide with a wide range of action on a variety of ‎field crop pests. The product has contact activity but is also efficacious when ‎ingested‎.

Mefisto is a systemic preparation of the chloronicotinyl group intended for use as a ‎general insecticide. The preparation acts as a stomach and contact toxin and is ‎relatively mildly toxic to warm-blooded organisms. ‎

Cytron is an insecticide of the synthetic pyrethroid family. It has an extended activity. ‎Cytron has contact activity but is also efficaceous when ingested.‎

Laguna is a white oil used to control orchard insects in their early stages of ‎development, especially the young stages of protected and soft aphids. The oil ‎creates a continuous film that covers the insect and causes suffocation. The product ‎is also used to remove Sooty mold ‎ resulting from the activity of various insects: the ‎oil absorbs the Sooty mold from the leaves‎. Rain that falls after application ‎enhances the removal of the Sooty mold ‎ from the fruit.‎

Phoenix ‎ 250 is an insecticide of the thiourea group. The product has contact ‎activity but is also efficacious when ingested.‎ ‎. The product is used in the control of both the Larva and adult stages of Bemisia ‎tabaci, spider mites, Phyllocopturuta oleivora and Polyphagotarsonemus latus.‎

Phoenix 500 is a thiourea insecticide that acts has contact activity but is also ‎efficacious when ingested. The product is used mainly in the control of various ‎stages of Bemisia tabaci, effectively eliminating both the larva and adult stages of ‎the fly.‎

Triggon is an insect growth regulator type insecticide that acts like a youth hormone. ‎The product is used to control various stages of Bemisia tabaci, soft aphids and ‎armored scales.‎

For the control of insects and Liriomyza trifolii larvae in flowers, vegetables and ‎field crops


Tropper is a systemic product that acts as a growth regulator of Liriomyza trifolii ‎larvae. The product, which is sprayed on the plants' foliage, is uptaken by the ‎larva, inhibiting the ecdysis process and preventing pupation. The younger the ‎larvae, the higher their sensitivity to the product. Results are seen in the field ‎about one week after spraying. Does not affect adult flies‎

Shunit is an insect growth regulator designed to control insects in various crops. The ‎product prevents the production of chitin in the insect's body, leading to an ‎interruption in the sloughing process. As a result, larvae die during sloughing or ‎shortly after. The product can also acts as an egg pesticide.‎

Perfect is effective in the control of insects and mites in Variety of crops. The ‎active ingredient, Emamectin benzoate, is a product of the biological activity of soil ‎microorganisms. The product is absorbed by the plants' tissues, and the residues ‎that are not incorporated into the tissues decompose within several hours. The ‎active ingredient is transported from the plant tissues to the pest, mainly via their ‎digestive system leading to loss of ability to eat and mortality within 2-5 day